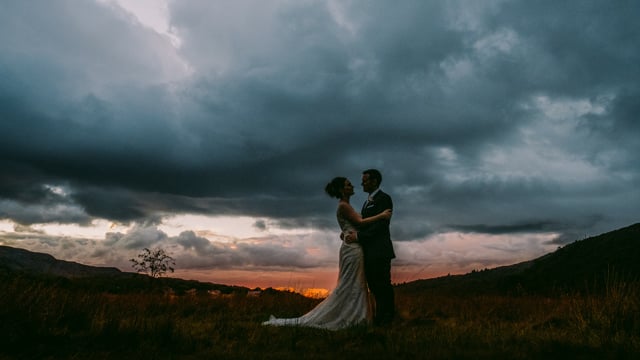 Keira and Nathan met in a cafe in Australia. Nathan heard Keira’s “beautiful British accent” and decided she was the one. He proposed after carrying the ring for two weeks looking for the right moment. The right moment was on a gondola floating through Cambridge University.

Keira’s dad Eric is a legendary climber and base jumper, he’s even flown a hot air balloon over Everest. After getting his permission to marry Keira, Nathan had to return her to her home town of Tremadog so that her dad could perform one of his most memorable and emotional feats of his life and walk her down the aisle. They decided to have their ceremony at Plas Brondanw after visiting the previous year and loving how it showcased North Wales and was surrounded by Snowdonia’s mountains.

Nathan says “My vision for the day was one of complete happiness and joy, I also wanted our guests to enjoy themselves. Adding some fun with the large Lanson Salmanazar was most entertaining. The dress was by Sottero and Midgley which we acquired in Newcastle, Australia. Keira felt like a movie star walking down the red carpet. My suit was clean and sharp in the colour of charcoal. All the bridesmaids wore Jenny Packham in Navy. We tried to maintain a North Wales feel throughout the wedding with some Australian flair (table names of Australian places that were special to us and Australian chocolates as favours). The cake was made by one of the bridesmaids, Laura.”

We met Keira and Nathan the day before the wedding. Like a lot of our couples we hadn’t met them before but had skyped so we had some idea of what they were about. It was a beautiful day, plenty of sun and some little fluffy clouds. They rehearsed the ceremony vows on the steps and we were all hopeful for the following day but the forecast was bad. On the wedding day it rained. It didn’t stop until well into the evening. The silhouette of them by the lake was the first time it stopped. Even then they were both wearing wellies. Every other photos until that point it was raining. Thank Fuji for lens hoods and waterproof ponchos. On the way to the hotel we stopped at a lookout point for some epic portraits. Keira kicked off her heels and went barefoot and I shot as fast as I could.

They were perfect clients. We couldn’t have asked for more and we’ll remember them for a long time. Nathan said some pretty nice things about us too –

“I have a background of landscape photography which gave me good insight in what to I wanted in our wedding photographers. I sifted through about 20 photographers throughout the UK that could deliver excellent photos while satisfying the rules of composition. I also wanted a little flair with good use of colour. Eventually I found Kevin & Carol and they fit the profile. The added bonus was their great sense of humour and personality.”

From the second we contacted Kevin and Carol they were great! We thought things may have been difficult as we were in Australia but they used Skype which made the distance easy.

They travelled 7 hours to get to our wedding and even met up with us the day before to ensure everything was on track and the setting was perfect for photos.

The day of the wedding, Kevin was up at 6am to ensure he was with the bride and bridesmaids at the salon capturing the girls getting ready. He was taking photos throughout the morning and made the girls feel comfortable in front of the camera.

Carol met up with the guys for breakfast to ensure nothing was missed! Carol was brilliant with last minute tidying of the groomsmen’s suits and attaching the button hole flowers to each groomsmen. We were lucky as no-one knew how to attach the flowers!

They helped to make sure both bride and groom were ready before the bride arrived to the ceremony through communicating the status of both sides while continually shooting photographs!

The most amazing part was that we didn’t even know that both Kevin and Carol were at the ceremony but, it was captured perfectly! That is a credit to their skills and professionalism. In addition, they both looked great. They dressed formally as if they were two of the guests and they just fit right in.

Every moment was captured throughout our day and we couldn’t be happier with Kevin and Carol. They even trudged through a field of mud to gain a position in last light that captured a photo which was more than we expected. Further to this, they stayed with us shooting friends and family well after our first dance. They truly went beyond the contract. I can’t speak highly enough of these two!”

Now Keira and Nathan are flying back to Australia with a 4 night honeymoon in Dubai on the way. When they get back they have a second wedding for all their Australian friends and family. Good luck guys, we’ll be thinking of you. Let’s hope it doesn’t rain.

If you are planning a destination wedding

Somewhere on the planet

This website uses cookies to improve your experience while you navigate through the website. Out of these, the cookies that are categorized as necessary are stored on your browser as they are essential for the working of basic functionalities of the website. We also use third-party cookies that help us analyze and understand how you use this website. These cookies will be stored in your browser only with your consent. You also have the option to opt-out of these cookies. But opting out of some of these cookies may affect your browsing experience.
Necessary Always Enabled
Necessary cookies are absolutely essential for the website to function properly. This category only includes cookies that ensures basic functionalities and security features of the website. These cookies do not store any personal information.
Non-necessary
Any cookies that may not be particularly necessary for the website to function and is used specifically to collect user personal data via analytics, ads, other embedded contents are termed as non-necessary cookies. It is mandatory to procure user consent prior to running these cookies on your website.
SAVE & ACCEPT